Showing posts from January, 2009
Show All

- January 29, 2009
I been poking around to understand how to create new sites collection in new content databases and i found some brilliant articles on that.

So all you need to do is

Add new content database in Central Administration > Application Management > Content Databases. (you can use different SQL server). Now all new sites will be created in this content database
Use the following command to export your site to the disk

Create new empty site with the same path, via stsadm –o createweb/createsite;
Import you site to the same url, and site will be created in the new content database.
Use the following command for this

- January 19, 2009
In this article I would take you through a 5 step process to create a new Search Site and then link that to your existing Team sites.

Step 2 : Create an SSP (Shared Service Provider) http://technet.microsoft.com/en-us/library/cc262914.aspx once its created it will automatically gather all the default sites and will grab new sites created. If you want to create a new SSP you can go to the Central Admin > Application Management > Manage this Farm's Shared Services > Create SSP

How can you list the appPools in a webserver when the IIS console is not available for some reasons or from the command prompt.

- January 16, 2009
How can you list the appPools in a webserver from the command prompt ?
There is a script available in the c:\windows\System32 folder iisapp.vbs
Type in iisapp in the command prompt and that will work !!!
For the first time , this will throw an error saying "The script does not work with wscript" say OK and it will pop up again asking "Would you like to register CScript as your default host for VBScript?" say YES for that it will message saying "Succesfully registered CScript" say OK and type in the command once again in the command prompt and thats it , it will show all the "ACTIVE" appPools which are running fine, issuing this command it would list out all the appPools which are curretnly active and rendering Sites. BUT it might not show appPools which are stopped or idle. You can even list out the AppPools with Pid and even recycle, check out the options by iisapp/?
Read more 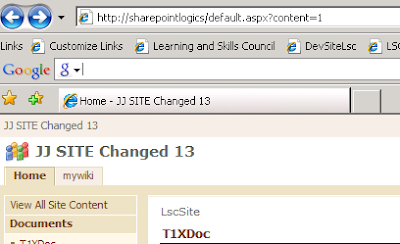 If you want to get into the Webparts maintanence page for any Sharepoint page all you need to do is append this query string to the end of the url and thats it you can get into the edit page.
Query String would be - ?contents=1 to the url in the browserEg - http://sharepointlogicssite/default.aspx?content=1
Often some webparts can cause problems on rendering, by logging to this mode you can always close the webparts causing the issue and try accessing the site.
Read more

While editing pages on your SharePoint you probably encountered a situation when Edit page command in Site actions menu is disabled.
This is not an error. Edit page command will be disabled when another user has checked-out that particular page. To see which user has done so you will need to navigate to Pages library on your site.
If you have the right permissions and you need to edit the page, you can show the page editing toolbar and then click on Page -> Override Check Out.
This will undo any changes the other users has made and the page will be checked out to you, but is useful if you really need to make a modification to the page.
Read more
More posts
Visit profile